The 2021 Reunion will be held Oct 21-24 in Atlanta and will include a trip to Ft. Benning to dedicate a Memorial to the Regiment’s fallen. The trip to Ft Benning’s Patton Park will be on Friday Oct 22, 2021. The ceremony will begin at 11 am, with a reception/lunch to follow in the Infantry Museum.

The statue below will be the centerpiece of our Memorial and it will honor all our fallen since 1836. 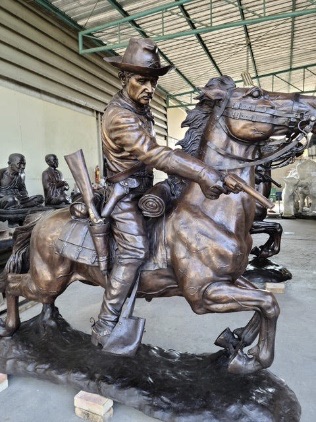 The Second Cavalry Association 2019 Reunion was held in Kansas City Missouri and was a rousing success. We were supported by a color guard from the Fourth Cavalry, and honored to host several members of our Regiment who traveled from Vilseck. In attendance was the RDCO, RCSM and the Regimental NCO and Trooper of the year.

The staff rides engineered by Frank Hurd and Tim White were exceptional. On Friday, we were treated to a discussion of the 2nd largest cavalry battle of the Civil War at Mine Creek (25 October 1864) and a tour of Fort Scott, Kansas the last remaining outpost of a line of forts from Minnesota to Louisiana that helped to enforce this promise of a “permanent Indian frontier.” On Saturday we had a very educational visited to the Presidential Library of Harry S Truman, and the very sobering and thoughtful National World War I Memorial and Museum.

The Punch Bowl Ceremony once again highlighted the rich history of the Regiment and at dinner we got a superb presentation by Pat Biddy concerning the repatriation of PFC Fred Ashley’s remains, who served the regiment during the Second World War, and the ongoing efforts to recover two more World War II MIAs. We were also briefed on the state of the Regiment by the RDCO, LTC Troy Meissel, who described a very active calendar for our Regiment, both tactically and as a political force in Europe.

Following the retirement of the colors, we were once again entertained by Frank Hurd’s not so silent auction with all of the proceeds going towards our memorial effort at Ft Benning. We missed those who couldn’t make the reunion and thoroughly enjoyed catching up with those who did.

This website uses cookies to improve your experience while you navigate through the website. Out of these cookies, the cookies that are categorized as necessary are stored on your browser as they are essential for the working of basic functionalities of the website. We also use third-party cookies that help us analyze and understand how you use this website. These cookies will be stored in your browser only with your consent. You also have the option to opt-out of these cookies. But opting out of some of these cookies may have an effect on your browsing experience.
Necessary Always Enabled
Necessary cookies are absolutely essential for the website to function properly. This category only includes cookies that ensures basic functionalities and security features of the website. These cookies do not store any personal information.
Non-necessary
Any cookies that may not be particularly necessary for the website to function and is used specifically to collect user personal data via analytics, ads, other embedded contents are termed as non-necessary cookies. It is mandatory to procure user consent prior to running these cookies on your website.
SAVE & ACCEPT